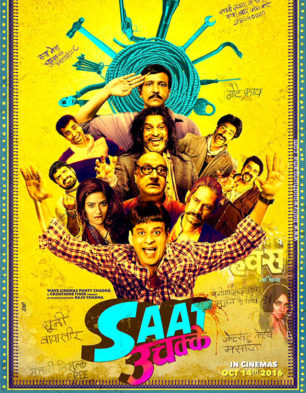 Comedy is definitely one of the most favourite genres of film lovers. Having said that, there very few films that manage to impresss and sometimes go beyond a viewer’s expectations. This week’s release SAAT UCHAKKEY is a situational that features some of the best acting talent in the country. But will the film manage to impress at the box-office with its content or will it turn out to be yet another failed attempt at making people laugh…. Let’s analyze.

Wave Cinemas and Crouching Tiger’s SAAT UCHAKKEY is a situational comedy about seven losers, who just like anybody, want to get rich. The film starts off with the introduction of Bichhi (Annu Kapoor), who does a hypnosis expert, who manages to escape from a mental asylum and sets himself free in the world where exist Pappi (Manoj Bajpayee) and his lady love Sona (Aditi Sharma). In order to win over Sona and her ‘concerned’ mother, Pappi tries his hand at many things to make quick money, but, somehow success eludes him every time. One day, while eating snacks at a roadside stall, he overhears a discussion about the hidden treasure inside the mansion of the eternally gun wielding old man Diwan (Anupam Kher). In no time, Pappi gathers his team consisting of Sona, Khappe (Aparshakti Khurana) and Haggu (Nitin Bhasin), who, then, join hands with Jaggi (Vijay Raaz) and his gang Ajji (Vipul Vig) and Babbe (Jatin Sarna). As a part of the ‘masterplan’, Pappi fakes his death after being shot by Jaggi, so that the righteous police inspector Tejpal (Kay Kay Menon) will never be able to suspect him after Diwan’s treasure is stolen. Amidst all this, it is revealed that the police inspector Tejpal is madly in love with Sona and wishes to marry her at any cost. Do the seven petty crooks (‘saat uchakkey’) successfully manage to execute their robbery plan, does Tejpal fall for their plan, amongst Tejpal and Pappi, who gets to marry Sona in the end and do the ‘saat uchakkey’ become successful in finding the hidden treasure… is what forms the rest of the film.

With the quirky nature of the promo of SAAT UCHAKKEY, one did get a whiff of what to expect from the film. The film howevert turns out to be a big surprise with its incredible humor, funny characters and sticky situations. The film’s screenplay (Sandeep Saket, Sanjeev Sharma) is brilliant as it sucks you right into the world of these funny characters and keeps you hooked. The unique quirks of the seven loony characters have been so well written, that, sometimes, it becomes tough to believe that they are actors performing their parts on screen. The duo of Sandeep Saket and Sanjeev Sharma have done a fabulous job in handling this script with so much ease. They have definitely got the ammunition of the best talents to live and breathe the characters.

After having tried his hand as a writer and an actor, Sanjeev Sharma makes his directorial debut with SAAT UCHAKKEY. Despite SAAT UCHAKKEY being his debut film, Sanjeev Sharma deserves accolades for the exemplary finesse with which he has directed the film. Kudos to the director for staying totally true to the story and the setting. If his directorial abilities in SAAT UCHAKKEY are anything to go by, then, Sanjeev Sharma is definitely a name to watch out for in the days to come. While the film’s first half sets the mood, tempo and the premise of the film as well as its well etched out characters, in the second half begins the comedy of errors while leads to confusion and chaos. Full marks to Sanjeev Sharma for brilliantly exhibiting the small town set up of old Delhi. One of the biggest highlights and USPs of the film are its absolutely superlative dialogues (Sanjeev Sharma). The language used in the film is extremely ‘colourful’ so to speak. However, since the dialogues are loaded and interspersed with expletives, it may not suit the taste of all the viewers. Having said that, one must add that the lines are outrageously funny and never come across as forced or thrusted. The characters talk naturally in the lingo where abusing each other is a common way of chatting. The dialogues are extremely hilarious and will generate nonstop laughter, especially with the masses.

As for the performances, the film has some of the best known and some undiscovered talents. The film rides majorly on the able shoulders of the talented actors Manoj Bajpayee and Vijay Raaz. The impact of these two actors in the film is so huge that one just cannot imagine SAAT UCHAKKEY without them. While Manoj Bajpayee justifies his character of an eternal loser very convincingly, he also, with his stellar performance, proves as to why he is the unanimous choice for the said role. Manoj, who has never done this kind of goofy comedy before, is truly refreshing to watch. He totally carries the movie like a true hero with conviction. He is followed a close second by Vijay Raaz, who is in his full element in the film. Watch out for the scene when Manoj Bajpayee and Vijay Raaz get into a fight and then patch up. Another outstanding scene is when Vijay Raaz gives a eulogy at Manoj Bajpayee’s ‘condolence meet’. Kay Kay Menon does his role of a lover and a righteous police inspector with utmost sincerity. Amidst the league of all the experienced gentlemen, Aditi Sharma successfully manages to create her space under the sun, with a brilliant performance of a headstrong and street smart girl. It’s good to see her in a powereful role after a long time. Aparshakti Khurana, Jatin Sarna, Vipul Vig and Nitin Bhasin, who besides excelling in their roles as useless sidekicks, are simply hilarious. These four actors are the biggest surprise package in the film and are surely the talents to watch out for. Veteran actors Anupam Kher and Annu Kapoor do a good job in their extended cameos.

Even though there is barely any scope for music (Bapi Tutul, Abhishek Ray, Jaidev Kumar, Vivek Kar, Saket and Niranjan) in the film, there are two songs which are very smartly placed in the film. The film’s background music (Sanjoy Chowdhury) is good.

While the DoP (John Jacob Payyapalli) has done a decent job, the film’s editing (Shree Narayan Singh) is crisp as the film maintains a good place and never slows down.

Overall, SAAT UCHAKKEY is an outrageously funny situational comedy, which will leave you in splits. However, the film has a high dosage of explicit language, which may restrict its audience reach in the multiplexes. Additionally, due to the film’s poor publicity and the lack of star value, the film will have to depend heavily on positive word of mouth, in order to do good business at the box office.