Sometimes a show is bigger than the actors – Iqbal Khan 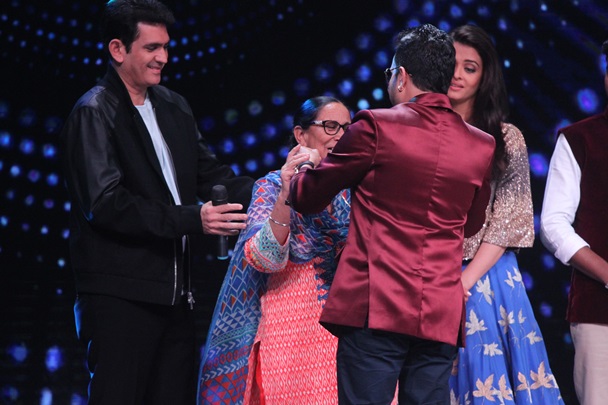 Popular Bollywood singer Mika Singh, who is currently seen as a mentor on India’s first and most definitive singing reality show – Sa Re Ga Ma Pa – is a true philanthropist.
Mika’s benevolence shines through many small gestures aimed at spreading smiles. From extending a helping hand to build a new house for the talented contestant duo Hashmat and Sultana of Sa Re Ga Ma Pa to offering new talent their first singing breaks, the rock star’s generosity leaves everyone happy.
Recently, the cast of the much-anticipated biopic ‘Sarabjit’ – Aishwarya Rai Bachchan, Randeep Hooda and director Omung Kumar along with the late Sarabjit Singh’s sister Dalbir Kaur, were present as celebrity guests on the sets of Sa Re Ga Ma Pa.
The film is a story of courage and perseverance of Sarabjit’s sister Dalbir Kaur who fought for 23 years to get her brother out of a Pakistani prison, where he was incarcerated under the charges of being an Indian spy. Dalbir Kaur mentioned how in her early stages of the struggle, she met Mika’s elder brother Shamsher Singh who is also a jury member on the current season of Sa Re Ga Ma Pa.
She revealed that Shamsher didn’t just believe in Sarabjit’s innocence but even joined a group of people who were canvassing for him at Jantar Mantar. Similarly, Mika, who feels closely associated with Dalbir Kaur’s struggle for her brother broke down and strongly believes that she deserves her due respect and acknowledgement.
To salute Dalbir’s spirit, he presented the brave lady with a khanda (the military emblem of the Sikhs) on the sets of Sa Re Ga Ma Pa and promised Dalbir that the marriage expenses of Sarabjit’s youngest daughter, Poonam will be completely borne by him. Mika’s act not only moved Dalbir, but it also left Randeep Hooda, who plays Sarbjit Singh on-screen and Aishwarya Rai Bachchan, who plays Dalbir Kaur, teary-eyed.
When contacted, Mika said, “Yes, I have promised to bear the entire expenses of Sarabjit’s daughter’s wedding. I will be grateful if I can be of any help to them. I’ve witnessed it all and I know how the brave Dalbir Kaur ran from pillar to post to prove her brother’s innocence. This is a salute to her firm spirit.”
Watch this special episode on May 21!