This beauty will be seen as Goddess Mohini in Sankat Mochan Mahabali Hanuman! 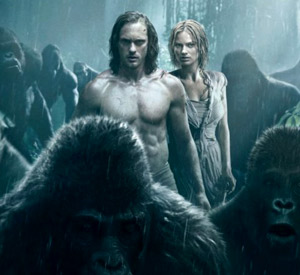 After last week’s plethora of releases, this week we see a couple of films hitting the screens. However, among the select few is the Hollywood film THE LEGEND OF TARZAN, a story about a boy born and raised in the jungles of Africa. But will this wild yet loyal son of the jungle manage to take the Indian box office by storm is the question of the hour.

The minute we hear the name Tarzan, we are fast taken back to our childhood when we would hear the story of a young boy who was raised by the beasts of the forest as one of them, until he falls in love with another beautiful girl, who just like him feels more at home in the dense jungles. However, THE LEGEND OF TARZAN is a different story altogether. Unlike the popular story, this film starts off with Tarzan having given up his wild ways for a more peaceful and comfortable life in London as John Clayton III AKA Lord Greystoke (Alexander Skarsgard) with his beloved wife Jane (Margot Robbie) at his side. But this time of peacefulness is fast shattered when he is invited back to the Congo to serve as a trade emissary of the Parliament, to investigate the activities at a mining encampment. Unaware that he is a pawn in a deadly convergence of greed and revenge, masterminded by the Belgian Captain Leon Rom (Christoph Waltz), Tarzan undertakes the journey putting all at stake. Will Captain Leon Rom manage to capture the feral man or will those behind the murderous plot finally realize what they have unleashed… is what forms the rest of the story.

Though THE LEGEND OF TARZAN isn’t the standard run of the mill stories about Tarzan, we do get to see the feral human every now and then via flashbacks of Lord Greystoke reliving his old life while on expedition. Here, it must be pointed out that despite a story that keeps looping from past to present back and forth, director David Yates does well to give each timeline equal importance while simultaneously merging the two sans the usual confusion. However, though the premise of Tarzan becoming civilized and living an idyllic life seems untoward, it complements the story well. Another high point of the film is the seamless visuals that manage to convince the viewer that the on screen proceedings are actually happening in a dense forest.

Talking about the performances of the lead cast, Alexander Skarsgard as Tarzan does a good job of playing the human with a wild side. However, there are a few instances where Alexander seems not perfectly fit for the part. On the other hand, Margot Robbie as Jane is heavily underutilized; in fact her character seems to be present in the film only to be the source of inspiration for Tarzan to fight. While she does a good job with what little role she has been assigned, she does manage to shine. Christoph Waltz as Captain Leon Rom is spot on. Waltz yet again brings life to a character that would otherwise have been dull. The subtle terror that Waltz manages to instil in his onscreen persona is palpable. Though each of the actors have done well in their limited roles, it is Samuel L Jackson’s character as George Washington Williams that is totally out of place. Though Jackson does manage to elicit a few laughs, the presence of his character in the film comes across as an attempt to explain to the audience the proceedings in the film. However, this severely backfires, with the viewer feeling like the makers did not trust them enough to know the story of Tarzan.

On the development front, THE LEGEND OF TARZAN does feature some cutting edge visual effects, that blend into the happenings seamlessly, in fact, certain scenes seem almost lifelike and real. From the creation of the rain forests in the Congo, to the wilder beast stampede, to Tarzan playing with the lions, the visuals stand out. However, despite the use of CGI, the battle sequences that you expect when good and evil clash are few and far between. Furthermore, it does not help that each of these battles are rather short lived and fail to satiate the viewer’s appetite for carnage.

On the whole, THE LEGEND OF TARZAN comes across as a film that has started out from the middle of a story and is trying to expand in all directions covering any and every aspect that can be used for future sequels. With a naïve story line, meandering plot, almost absolute focus on one single character and general confusion with the direction in which to take the film forward, THE LEGEND OF TARZAN is all but legendary.