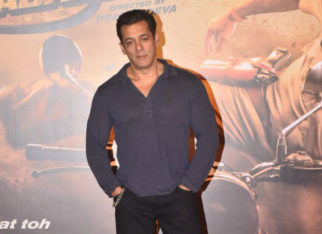 After Sanjay Leela Bhansali’s Inshallah got racked, fanatics of on-screen character Salman Khan were envisioning him to declare his next Eid discharge. Before long enough, the entertainer declared the film Radhe: Your Most Wanted Bhai. A few people began guessing that the film is a continuation of his 2009 film Wanted as his character name in the film was Radhe. Presently, the entertainer has dispelled any confusion air around the film Radhe at the trailer dispatch of Dabangg 3.

Salman Khan said that the film isn’t a spin-off of his super hit film Wanted. “The name was in really ‘Tere Naam’ and after that utilized in Wanted yet nothing to do with Wanted except for uss group mein bola jaaye toh Wanted ka baap hai,” he said.

In the interim, Radhe will be coordinated by Prabhu Dheva who coordinated Salman Khan in Dabangg 3 and in Wanted also. The team will start going for the film in the main seven day stretch of November. The film is planned to hit the auditoriums on Eid 2020.

Then again, Salman Khan alongside the group of Dabangg 3 propelled the trailer of the film today. The movie is coordinated by Prabhu Dheva and furthermore stars Sonakshi Sinha who will repeat her job as Rajjo. The motion picture denotes the presentation of Saiee Manjrekar and will see Kannada star Kiccha Sudeep as the opponent.