Look whose track is about to end on D4 Get Up and Dance! 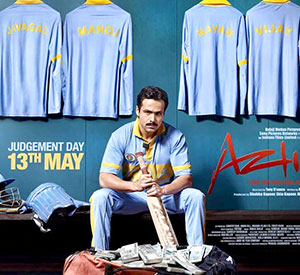 Bollywood is known for its ultra glamorous dream like movies. However, in the past couple of years, the Indian audiences have become very receptive to biopics. The real life stories of influential Indian personalities seem to be working very well at the box office. This week’s release AZHAR, based on the life of former Indian cricket captain is one controversial untold story. Will AZHAR manage to have successful innings at the box-office… let’s analyze.

“Bhai jab chhaati pe India likha ho to dil nahin bharta,” says Mohammad Azharuddin after scoring a century in his 99th test match and being asked about his retirement plans. Immediately after that Azhar is struck by a bombshell that he has been implicated in the match fixing scandal and will be axed out from the Indian cricket team.

Azhar (Emraan Hashmi) is an introvert who’s instilled with only one aim in life by his grandfather (Kulbhushan Kharbanda) and that is to play 100 test matches for his motherland India. The journey of success is dotted with his marriage to the lovely Naureen (Prachi Desai). Their angelic love story smeared with lighthearted funny moments moves like a swift breeze. The life of Indian cricket team captain makes him cross flower-laden path with the gorgeous actress Sangeeta (Nargis Fakhri) who was nursing a broken heart. The introvert Ajju becomes the more outgoing, suave Azhar flashing expensive watches and stylishly lifted collars. The tongues start wagging, the match fixing scandal takes the country by storm and in his quest for clearing his name and the ignominious life ban, Azhar decides to take the battle to the Court where he’s represented by his under confident lawyer friend Reddy (Kunal Kapoor) while the prosecution lawyer is the fiery Meera (Lara Dutta), an erstwhile diehard Azhar fan.

Director Tony D’souza’s AZHAR brilliantly captures the angst, the simplicity, the colossal success, the dual romance, tryst with infamy and an arduous innings of never ending struggle-to-clear-the-name of Indian cricket’s heroic, yet arguably the most controversial captain Mohammad Azharuddin. Tony is stoically backed by the career best performance of Emraan Hashmi and excellent writing of Rajat Arora.

Everyone was wondering as to how would the makers of AZHAR present his highly scrutinized and well-known public-personal life. The tone and tenor of the film is set at the beginning itself with the unpredictable screenplay. The story moves forward in a non-linear fashion making you cringe in disbelief at one moment and unleashing a hearty laughter at almost the very next. The intensity of writing is sustained right throughout and Tony D’souza tightly weaves everything together making you clap and shed tears towards the end of the film. Dialogues (Rajat Arora) are consistently first rate. Sample these: ‘Jab farak nahin padta zindagi mein, farak tabhi aata hai’ or ‘Iske baad India ko Azhar mil gaya aur Azhar ko India’.

Emraan Hashmi has been struggling to score a hit for quite a while. But AZHAR is the film that an actor of his caliber needed to show his true potential. Hashmi is in an excellent form. He bats on the front foot, strikes fours and sixes of jubilance in a classic manner and hits the ball-of-class out of the park with the sheer endearing manner in which he captures the soul of Mohammad Azharuddin. Yes he does imbibe the body language and mannerism that are synonymous with Azhar but more importantly, Emraan Hashmi internalises the spirit and pain that the beleaguered former Indian captain must have gone through. The audience will reward this heart-tugging performance with a thunderous applause. This is possibly Hashmi’s best performance till date.

Prachi Desai is delightful as the simple Naureen. She looks exquisitely pretty and acts with a lot of heart. The reason that she gives for backing Azhar in his difficult times is convincing and displays a lot of character. Nargis Fakhri is a visual delight for she is a glam doll and surprisingly adds ample emotional quotient to help you delve into the psyche of the proverbial ‘second woman’. Kunal Roy Kapoor as the bumbling lawyer friend is a major highlight of the film. He ensures genuine comical moments in spite of retaining the seriousness of certain key moments in the film. Lara Dutta is in top form as the no-nonsense prosecution lawyer. Kulbhushan Kharbanda as Azhar’s grandfather shines in a cameo. Gautam Gulati as Ravi Shastri is effective.

Rajat Arora needs to be applauded for his engaging and tight screenplay and witty dialogues.

AZHAR however is a complete director’s film. Director Tony D’Souza who has earlier made big scale entertainers like BLUE and BOSS has surprised one and all by handling a very dramatic subject like AZHAR with such brilliance. He has managed to portray the touching life story of Mohammad Azharuddin in a very engaging narrative. At no point does the film slow down and the viewer is constantly on the edge of his seat. AZHAR will surely be remembered as one of Tony D’souza’s best work.

On the flip side, there maybe some issues with the continuity in the film as some characters are not shown to age properly with time. The choice of actors portraying the real life cricketers isn’t consistently effective. Some of the ex-cricketers have been shown in a philandering mode or agreeable with match fixing. It remains to be seen how they shall react to their portrayal.

On the whole, AZHAR is a highly engaging piece of cinema that grips you completely and keeps you guessing. The story telling is objective as it shows both sides of the coin. You are simultaneously treated to the arguments for and against the verdict on Azhar’s personal and public upheavals. You are also made to come across a fiercely hungry actor in Emraan Hashmi who simply grabs you by your eyeballs and compels you to witness his masterful knock!

AZHAR is a superlative watching experience. Don’t miss it for anything!