Behind the scenes: Barun Sobti and Surbhi Jyoti’s ROMANTIC shoot! 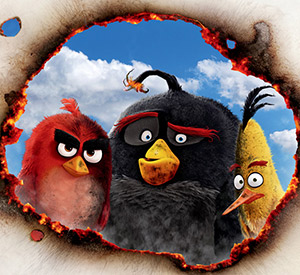 Filmmaking by far has become one of the most lucrative businesses not just for small time producers but for the mega corporations that pump in millions of dollars into production. But with the number of films being made each year original concepts (good or bad) are few and far between. In fact in the recent past we have been witnessing a rise in films that are based on bestselling novels, comic books or real life incidents hitting the screens. But there is another area from where quite a few films in the past have drawn their inspiration; yes we are in fact talking about films based on video games.

After the film HITMAN: AGENT 47, that was based on a game by the same name released last year, this week we see the release of yet another game-based film THE ANGRY BIRDS MOVIE. This 3D animated comedy delves into the ethos of the game itself to understand why the birds are really so angry. For this, the film takes viewers to an island populated entirely by happy, flightless birds and introducers the main characters, Red (Jason Sudeikis), a bird with a temper problem, speedy Chuck (Josh Gad), and the volatile Bomb (Danny McBride)… all 3 being always seen as outsiders. But when the island is visited by mysterious green Pigs, it’s up to these unlikely outcasts to figure out what the pigs are up to. THE ANGRY BIRDS MOVIE, much like the game, follows the same plot line of the flightless birds leading an idyllic life till the pigs wreak havoc in their paradise and steal their eggs. Will the birds find a way to retrieve their stolen eggs or will the pigs outsmart the birds is what the rest of the film is about.

THE ANGRY BIRDS MOVIE starts off depicting the idyllic life of the birds, though everything is fine, Red aka Eyebrows (thanks to his trademark bushy eyebrows) seems to be always angry. After losing control of his anger Red is sentenced to serve maximum punishment and attend the Anger Management class. Here Red meets Speedy Chuck, Bomb and Terrance who are also dealing their issues of management. Totally disinterested in participating, Red longs to get out as soon as possible, and gets the chance to do so when the island is visited by a mysterious unidentified floating object which incidentally contains the pigs. Feeling something is amiss, Red goes on a mission to investigate the pig’s ship along with Chuck and Bomb. While rummaging through the ship the trio happens upon an entire battalion of pigs just waiting for the word to come out. Fearing the worst, the anger ridden trio go on a mission to search for Mighty Eagle to guide them. Though they manage to find the elusive retired bird, they also realize the pigs have an ulterior motive, one that involves them stealing the birds’ eggs.

Featuring an all-star voice cast that includes Bill Hader (Trainwreck, Inside Out), Maya Rudolph (Bridesmaids, Sisters), and Peter Dinklage (Game of Thrones), as well as Kate McKinnon (Saturday Night Live, Ghostbusters), Keegan-Michael Key (Key & Peele), Tony Hale (Veep, Arrested Development), Tituss Burgess (Unbreakable Kimmy Schmidt), Ike Barinholtz (Neighbors, Sisters), THE ANGRY BIRDS MOVIE is well animated. However, in an age when Pixar, Dreamworks and their likes are churning out engrossing animated films with captivating stories, THE ANGRY BIRDS MOVIE severely lacks a decent story. Though the plot of the film is rather limited to pigs stealing eggs and the birds going on a mission to recover them, the makers could have woven a more intricate story surrounding this premise. Another point that came across as a drawback was the fact that if a viewer has not played the game, the characters in the film seem highly underdeveloped and half baked.

But what works of the film is the fact that is it based on a game franchise that literally got the world hooked on to shooting birds out of slingshot coupled with seamless animatronics that make each character lifelike. Subtle references to modern day pop culture like the pigs featuring DJ modelled on Daft Punk, and subliminal humorous visuals work well in keeping the viewers in their seats.

On the whole, like most films that have been based on games, THE ANGRY BIRDS MOVIE follows a similar path. The film though entertaining, lacks the semblance of a decent story which can be attributed to the lack of a plot in the game. However, debutant directors Clay Kaytis and Fergal Reilly have done a brilliant job of adding life to the characters with impressive visuals and 3D.

All in all, if you have played the game, THE ANGRY BIRDS MOVIE will be a fun watch, while for those who haven’t they can still enjoy stellar animated visuals. Kids will definitely love the feathered lot.