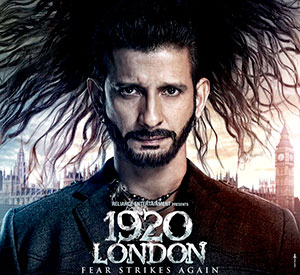 The year 2008 saw the release of a horror film titled 1920, which was followed its quasi-sequel (in the year 2012) titled 1920: THE EVIL RETURNS. This year, we see the release of 1920 LONDON, which happens to be the third installment of the franchise. While the first two films did manage to scare the daylights out of the audience, what remains to be seen if 1920 LONDON will manage to get the fear factor translated into Box-Office success. Let’s analyze.

The film starts off with the homecoming of Shivangi (Meera Chopra) from London to Sikar (Rajasthan). When her parents question her about the unannounced visit to home, she narrates incidents that forced her to come back home. The story then goes into an array of flashback incidents that had occurred with her husband Veer Singh (Vishal Karwa), who, presently is in an extremely miserable state. And the reason for his condition happens to be a gift that he got from Rajasthan. Post the ‘arrival’ of the gift, strange things happen to him and his physical, spiritual and mental condition spirals out of control. When even the best of medical treatment fails to yield the expected results, Shivangi gets to know that her husband is a helpless victim of black magic. On reaching India, Shivangi is told that the only person who can successfully cure Veer of the black magic is Jay (Sharman Joshi), the very person whom her family is reluctant to meet because of the failed love affair between Shivangi and Jay, which also resulted in Jay being falsely imprisoned for 5 years. But, when Jay sees Shivangi’s sorry state of affairs and that too, for no fault of hers, he agrees to become the ‘witch doctor’ and cure Veer of the black magic. But, when Jay tries to enslave the spirits, he becomes unsuccessful. Amidst all this, a certain truth dawns upon Shivangi, which shakes her completely. What is the truth that shocks her so badly, is Jay able to enslave the spirit and set Veer free and was there a reason behind his failure in his war against the spirits… is what forms the rest of the story.

Even though 1920 LONDON’s story (Vikram Bhatt) treads on the same path of fear as its earlier two films, this film does have comparatively more novelty value than the earlier two films. Complementing the story, is the film’s screenplay (Sukhmani Sadana), both of which help in giving fear a new meaning and a dimension.

The film’s debutant director Tinu Suresh Desai does a superlatively decent job with 1920 LONDON. He achieves his motive of shocking the cinegoers almost in every scene and scaring their wits away. His direction complements the film’s screenplay and narrative and vice versa. He does a splendid job in culminating the story, which is an extremely vital aspect for a horror mystery film. Tinu also needs to be applauded for delivering what the film promises in abundance viz., eerie and scary moments in plenty. While the film does suffer from its ‘lagging moments’ in the first half and more towards the second half, the interval scene surely shocks the viewers and catches them unawares.

As for the performances, Sharman Joshi does a good job and justifies his character. As the film progresses, you start empathizing with his character. The efforts and the hard work that he has put in order to get into the skin of the character shows in his performance. As for Meera Chopra, this film happens to be her second Hindi film (her first being GANG OF GHOSTS). Meera performs the role of a helpless woman stuck between her husband and her ex-lover with brilliance. She carries herself graciously and is immensely likeable. Even though Vishal Karwar does not have much to do in the film, he does a decent job in whatever screen time he gets. The rest of the characters help in film moving forward.

The film’s cinematography is very good. The DoP (Prakash Kutty) does a good job of capturing the serene beauty of London on the celluloid. A special mention to the film’s vfx team, art department and the makeup (prosthetics) team for enhancing the look of the film and the characters. Had the film’s editing (Kuldeep Mehan) been bit sharper, it definitely would have worked in the favour of the film.

On the whole, 1920 LONDON is an engrossing fare with the right amount of eerie and scary moments. It has its ample share of terrifying moments that one expects from a film about supernatural forces. It has the potential to appeal to all sections of audiences at the box-office.